The following article ran recently in the Portside Local, a free to home community focused paper distributed to 4400 homes and businesses every fortnight across the Port of Newcastle, NSW. 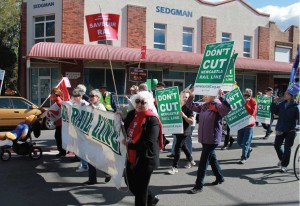 Photo of SOR supporters at the May Day march 2014, taken by Chris Smith.

As the ICAC investigation continues to sweep through NSW, Save Our Rail has moved to seek answers from the Premier, Mike Baird, as to the full extent of funding irregularities at the last election and their consequences.

“Mr Owen’s damning statement that he now realised it was “highly likely” there had been illegal donations to his election campaign is an indication that he should have stepped aside immediately,” said SOR President, Joan Dawson. “That would have been the honourable thing to do.”

In a press release the SOR President questioned a number of decisions around truncation of the railway line and the decision to sell the Port “without community consultation.” Ms Dawson also questioned the relationship of the developer, GPT in partnership with the NSW Government (Urban Growth) which has carriage of assessment decisions of a joint proposal, which she called “unhealthy” and likened to the “vampire in charge of the blood bank’”.

Questioning the entire process at the last election the release went on to say “It is becoming very obvious that developer interests have been involved in the funding of the 2011 elections and have driven decisions being made by the NSW Government, especially related to Newcastle Renewal.”

“Mr Owen who himself has misled Parliament declares he will finish his term as Newcastle MP and that he will continue with the inappropriate activities he has pushed which will adversely affect Hunter communities” concluding that as “Mike Baird, who declared he will re-establish trust in Government needs a great big new broom to sweep it clean beginning with eliminating any MP having questions over their integrity.”

“Who is running this state and who is really behind decisions, clearly against the majority opinion and causing disadvantage to the Hunter community?” asks Ms Dawson.