Save rail line into Newcastle 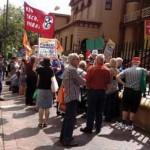 Rally outside of Parliament House

About 500 people travelled from the Hunter Valley and Central Coast to a rally held outside Parliament House, Sydney on February 19.

The rally was held as part of an ongoing community campaign against the O’Farrell Government’s decision to cut the railway line into the Newcastle CBD at Wickham, 2.5 kilometres short of the current terminal, the heritage listed New­castle Railway Station.

There is strong opposition to the cutting of the line, not only from residents of Newcastle, Lake Mac­quarie and the Central Coast, but also from outlying communities such as Maitland and other Hunter Valley townships that rely on rail transport to access the centre of Newcastle.

Business owners attending the rally also expressed anxiety for the future viability of their firms. One retailer noted the downturn in business that already occurs when buses replace trains due to track work. The O’Farrell Gov­ernment intends to permanent­ly replace existing train services with buses between Wickham and Newcastle.

The decision to cut the railway into Newcastle represents yet an­other attack from the O’Farrell Government on the provision of essential public services and the public good. As was noted by one speaker at the rally, many of the developers agitating for the rail cut own land adjacent to the railway line which runs alongside the har­bour between Wickham and New­castle stations.

Speakers at the rally included the Greens MLCs David Shoebridge and John Kaye, Cessnock MP Clay­ton Barr, local activists Doug Lith­gow and Joan Dawson (President of the Save the Rail committee and Federation Life Member), as well as representatives from the Rail, Bus and Tram Union.

Participants attending the rally vowed to continue to fight on.