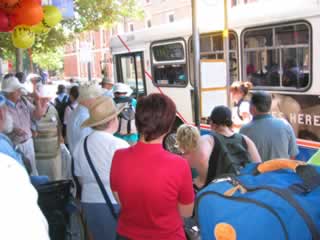 NEWCASTLE STATION – When former Minister for Transport Costa announced the closure of Broadmadow to Newcastle rail line, he also mentioned that no new buses or special roads were needed as there was sufficient capacity in the existing Newcastle buses. A year before he announced that superior buses would provide a better transport system on a dedicated bus corridor. People of the Hunter were asked to assemble at Newcastle station at 2.30 PM to see if it is indeed practical for them to change over to a bus from a train at Newcastle Station.