Fate of Newcastle rail still in the balance 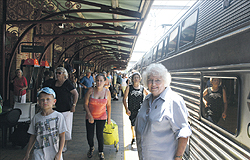 Joan Dawson joins the throng disembarking at Newcastle station. "And they say this line isn't used," she quipped.

Labor conspicuously vague on cutting the line but Liberals may not be so reticent.

For public transport lobbyists in the Hunter, the irony would be bitter. After community opposition stung the Rees Government into dropping unpopular rail legislation last month, the voice of the people – the electorate – may yet deliver something even more unpalatable than the dumped law: a Liberal government determined to cut the Newcastle line.

In May, the Government’s Hunter Development Corporation (HDC) recommended that the line be cut at Wickham station, and in August, Premier Nathan Rees admitted he was “leaning” towards the idea. Internally, that support appears more explicit, with a draft cabinet minute produced in May endorsing the plan.

Transport Minister David Campbell last month withdrew controversial legislation that would have allowed the Government to rip up rail lines at the stroke of a pen, circumventing a century-old law that required an act of Parliament and attendant debate in the House before a line could be removed.

The Government had framed the original “Rail Trails” bill as a socially responsible attempt to create cycling paths on the space occupied by disused rail lines. Others saw it as a Trojan horse for allowing the Government to tear up rail lines and sell rail corridors, such as the line into Newcastle’s city centre, to developers.

It is understood that the accident-prone Rees Government realised it could not afford to alienate key electorates in the far north coast and the Hunter and dumped the bill. A newly elected Liberal government with the benefit of a crippled opposition, however, may feel it has the mandate, and potentially the numbers in the Upper House, to do as it pleases.

The President of Save Our Rail, retired teacher and long-time Federation activist Joan Dawson, believes the threat to the Newcastle rail line is far from dead.

“I don’t think it’s the end of the threat to Newcastle’s line, because [then transport minister] Michael Costa in 2004 announced that the line would close, and then he planned to go about making new legislation to fit that agenda,” she said. “But it didn’t get that far because [then] Premier Iemma overruled that decision.

“I have a fear that the Liberal Party would push it through even quicker because the original idea to close the Newcastle line came from the Liberals.

The HDC is the successor to the Greiner government’s Honeysuckle Development Corporation, which was charged with overseeing the redevelopment of vacant industrial land on the southern foreshore of Newcastle Harbour. Critics of the rail line say it blocks access to the harbour.

Following a Newcastle City Council-commissioned report that recommended the line be cut at Hamilton, Mr Costa, then also minister for the Hunter, said in 2003: “The current rail line in Newcastle city is expensive to run and maintain and is an eyesore which divides the city from the foreshore…That means we have to consider alternatives.”

But Ms Dawson said the line didn’t have to be removed to provide access to the harbour. Save Our Rail has published a comprehensive alternative that not only maintains the social benefits of rail direct to the city but also renders the line and its infrastructure unobtrusive, physically and aesthetically.

More importantly for developers, the proposals contained in Newcastle: towards a sustainable and vibrant city open up the public’s access to the harbour and the presumably gentrified city centre.

This makes business support for truncating the line at Broadmeadow or Wickham harder to understand. But that’s taking a holistic view – deals may have already been done. And Ms Dawson says the land on the rail line itself is more valuable because of Newcastle’s unique history.

Old mine workings underneath Newcastle must be “grouted” (backfilled) up to 70 metres below the surface of sites slated for redevelopment under NSW Mine Subsidence Board (MSB) regulations.

“Newcastle’s mainly ‘under-mined’ by coal mines,” Ms Dawson said. “I think the actual cost of developing land in Newcastle is very high for that reason, and the developer group as a whole sees the Newcastle line as a space that is not under-mined and may [therefore] offer much cheaper development.

In a motion put to Newcastle City Council on November 17, Greens Councillor Michael Osborne clarified the forbidding costs involved: “The MSB requirements mean that grouting usually extends well beyond the footprint of the site to be developed, under public space and adjacent sites….

“Grouting is expensive, including a relatively large fixed mobilisation cost, regardless of the size of the site, just to get equipment on site and set up (before any costs for drilling and materials).”

Despite this, Ms Dawson said reducing the argument to exclusively economic concerns was a dereliction of responsibility for the social and environmental impact of the loss of the line.

“The provision of public transport is a social issue, and my union, the NSW Teachers Federation, has a proud tradition of taking up social issues,” she said. “Those most affected by the loss of this service, and who would suffer real adversity, are the less wealthy members of the community: the physically disabled, parents with young children, the elderly and blind passengers.

“We say it doesn’t make sense [to cut rail access to the city], but they’re [developers] looking at immediate profit. We’re looking at the long term and in our view, with peak oil and other environmental concerns, we should be increasing rail not decreasing it.”

But Save Our Rail is also willing to argue on economic terms. Its Newcastle report quotes a letter sent to Honeysuckle by Dupont Fagan Valuers – a Newcastle-based valuation and property research firm – in 2000 to highlight the false economy of removing a direct rail connection to the market.

Obtained under the Freedom of Information (FOI) law, it stated: “If an urban transit system never earned an operating profit, it would still pay for itself a thousand times over through its beneficial impact on real estate values and increased assessments.”

Ms Dawson added: “In fact, Save Our Rail did work at one stage with the Business Chamber. They invited us to work with them on a regional strategy for the lower Hunter. But they never would discuss the Newcastle line, only the whole region and refused absolutely to enter into any discussions on the Newcastle rail line because they already had their position on that.”

Gauging community support for either option is an inexact science. The HDC’s Renewal Report claims “widespread support” for “positive intervention; that the rail line in its current form was a physical and psychological barrier” (report’s italics).

In August, Premier Rees cited a Hunter Valley Research Foundation survey that found 71 per cent of respondents supported removing the line between Wickham and Newcastle if other projects depended on that course.

The ditching of the Rail Trail bill provided at least a hint at which stats the Government really believes.

“In recent years the number of people marching in May Day has dwindled, but in 2005, Save Our Rail produced 500 people marching behind our banner and took over the march. That had to be giving a signal to someone,” Ms Dawson said.

Meanwhile, the Government and the transport bureaucracy aren’t on the same page when it comes to the financial viability of cutting the line and building an interchange at Wickham. The Newcastle Herald on November 10 quoted documents obtained under FOI that revealed that RailCorp chief executive Rob Mason had advised Minister Campbell that it would take 12 months and $1 million to finish studies to determine if a Wickham interchange was “even feasible”.

“Briefing notes from (then) transport ministry director-general Jim Glasson outlined a raft of similar concerns about the [HDC’s] proposal and the robustness of its costings,” the Newcastle Herald reported.

That supports Save Our Rail’s analysis. “HDC cannot be viewed as impartial,” the Newcastle report stated. “HDC evolved from the Honeysuckle Corporation, which had a ‘closed rail corridor from Civic to Newcastle station’ as one of the key elements in its approved scheme.”

The HDC created reasons, it said, for closing the rail line “by exaggeration, inference, distortion of fact, misrepresentation and omission” and its cost-benefit analysis was “flawed through the application of inaccurate costings”.

Against this background of rubbery figures, opaque motives and division between the government and the bureaucracy, the next key date in this saga may be one that should hold no little dread for state Labor: the March 2011 elections.