[NOTE: October 2008: This plan is being currently being expanded to address all north-south connectivity issues, as per our October 19th media release, and will deliver a solution superior to GPT’s proposal while retaining the rail. When ready, it will be posted on this website.] — Proposal now available here.

A delegation from Save Our Rail presented our public transport improvement plan to representatives of Transport Minister Watkins. Also attending was Member for Newcastle, Jodi McKay, who supported our plan.

Features of this proposal include the provision of relatively inexpensive options:

Download the entire document “Sustainable Transport in an Urban Environment: the Need for Transport Integration in Newcastle“: 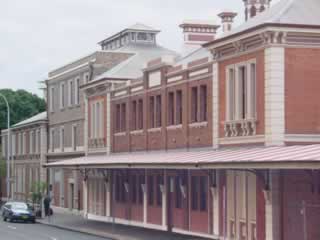 Summary of the Proposal

With growing and increasingly aged population, global warming and soaring petrol prices now is an ideal time to improve and expand this resource.

Pedestrian access to the Honeysuckle developments from Hunter Street is poor. It is totally lacking for the newer office buildings at the western end of Honeysuckle Drive, which have no link to the Hunter Street bus network or to the nearby shopping facilities.

At grade crossings at Steel Street and Worth Place would provide a relatively low cost solution to this problem.

Crossings need to be identifiable from the distance, proclaiming “I can cross here.” Save Our Rail suggests that arches, reflecting Newcastle’s architecture, would be symbolic of this city.

The arch depends on its keystone and these arches, indicating crossings, will be the keystones of the newly integrated City of Newcastle.

In our opinion the provision of these crossings is essential for the effective functioning of the city.

There is a need for improved access to the whole Honeysuckle precinct by a separation of road and rail at Stewart Avenue. Save Our Rail continues to promote the provision of a rail flyover, as a cheaper option than a road overpass to unclog this intersection.

Reports in the Maitland Mercury express community concern over the inability of the road system, already under stress, to cope with large land releases.

Traffic on the connecting road between the two cities, Maitland and Newcastle, is forced into a bottleneck, where the road runs between the Hunter River and Hexham Swamp, the geography limiting expansion of the road,

The necessary mass transit system, the rail line, is in place to provide for commuting between the new developments and a newly created employment complex in Newcastle.

The land releases in the Maitland area are close to the rail, but lack stations. The replacement of stations lost at Farley/Rutherford and Oakhampton and provision of a new station at Aberglasslyn would encourage the use of rail and prevent further road congestion.

The huge development occurring at Thornton North would better access the rail with the provision of parking and an entry road to the northern side of Metford Station.

The Huntlee housing estate requires an upgrade of facilities at Branxton Station. The recent decision to provide bus facilities instead, is inappropriate, as these will contribute to the road congestion, and will be caught in the bottlenecks already occurring.

Victoria Street Station is well patronised, but lacks disability compliance, which would be overcome with the provision of lifts.

The connection between the Sydney train and the diesel service to Maitland needs some examination as to whether a “dedicated connection” is warranted.

Newcastle Station is a magnificent building and is the most used station in the local network, in terms of patronage. However there are currently unused areas within the building which could be reactivated. Its proximity to activity areas – at Queens Wharf and Hunter Mall (which is to be redeveloped) indicate the untapped commercial potential of this asset, which could become a function centre or accommodation facility.

The passenger friendly aspects of Newcastle Station would be enhanced with improved access, by opening the western end – towards Newcomen and Bolton Streets (and the Mall) and towards Queens Wharf and the ferry service.

Sympathetic Development on the foreshore side of Newcastle Station should be considered, which could provide an income stream for the maintenance of this heritage building and towards the improvement of passenger services.

Public transport, in particular train transport, will become more vital with increased population, more aged people, global warming and the need to reduce car emissions, as well as rising petrol prices with the reality of “Peak Oil”already evident. It needs to be convenient, frequent and punctual if it is to be chosen over car use.

The Save Our Rail proposals are aimed at the integration of public transport services in the Newcastle and Lower Hunter area through:

Now is the time for a further investment in the Newcastle and Hunter Rail Lines.