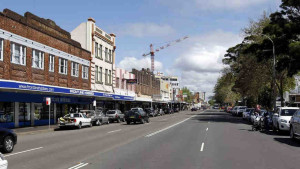 Hunter Street is the government’s choice for a light rail service.

The NSW government rejected official advice about the best route for light rail into Newcastle in favour of a plan that may cost up to $100 million more, delivers a slower service and provides greater opportunities for property developers, reports the Newcastle Herald and the Sydney Morning Herald.

Confidential cabinet documents reveal that, in December 2013, Transport for NSW advised that the preferred light rail route was along the corridor for the heavy rail line that was to be ripped up as part of a revitalisation plan for Newcastle.

But six months later – following consultation with government property developer UrbanGrowth NSW – it was announced the new line would only use a small part of the heavy rail corridor before diverting along the thoroughfare of Hunter Street.

This is despite Transport for NSW’s advice to cabinet that running light rail down Hunter Street would mean a slower service, disruption of traffic, and higher construction and heavy rail corridor remediation costs.

The advice put the cost of the preferred option at $206.7 million. The “on road and corridor” solution – similar to the final announcement – was priced at just over $300.7 million.