Save Our Rail wins order to stop removal of track 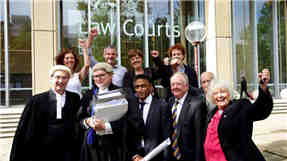 The jubilant Save Our Rail and their legal team outside the Supreme Court in Sydney.

The NSW government will be unable to remove railway tracks through the centre of Newcastle for the time being after a community group won a last-ditch court judgement, reports the Newcastle Herald.

The victory for the Save Our Rail group followed the government’s extraordinary manoeuvre in which it attempted to bypass laws preventing the disposal of rail assets by beginning the transfer of those assets to another government agency.

“David has given Goliath a big headache for Christmas,” a jubilant president of Save Our Rail, Joan Dawson, said outside the NSW Supreme Court on Wednesday afternoon.

Following two days of hearings, Justice Michael Adams told the Court that if rail assets were acquired by the other agency – the Hunter Development Corporation – then it would became a rail infrastructure owner and therefore unable to remove tracks except by act of parliament.

Counsel for RailCorp Adrian Galasso immediately said the government would appeal the decision.

To get around the Act, the NSW government last week started the process of transferring by compulsory acquisition certain rail assets such as signalling systems, lighting equipment, overhead wiring and boom gates from RailCorp to the Hunter Development Corporation.

This was revealed only in court on Tuesday.

In a judgement delivered on Wednesday afternoon, Justice Adams found that this was a legal means of transfer and was not prevented by the Transport Administration Act.

But the Judge accepted the argument advanced by barrister for Save our Rail Shane Prince that this also meant the Corporation could not remove the rail line.

“The relevant infrastructure which has been acquired by the Hunter Development Corporation has made it a rail infrastructure owner… and it follows therefore that without an act of Parliament it can’t remove railway tracks or other works concerned.”

Nevertheless, the government still intends to undertake some works from Boxing Day.