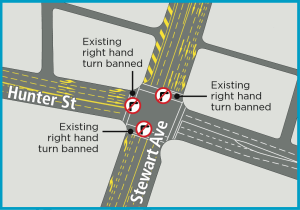 IT’S already among Newcastle’s most congested and frustrating traffic intersections, but a draft report suggests the planned Wickham rail interchange will make Stewart Avenue’s intersection with Hunter Street even more of a nightmare, reports the Newcastle Herald.

It shows that three of the four right-hand turn  options currently at the intersection could be eliminated when the interchange is opened and when the nearby Railway Street crossing is closed.

Newcastle Greens councillor Therese Doyle said such a move would be seriously flawed. She  said the document shows the government has ‘‘no real idea of the traffic implications’’ of the Wickham interchange.

“Along with everything that is coming out of the current parliamentary inquiry, the whole thing has the feel of a headlong and irresponsible rush to push the rail cut through despite any implications for public safety and before the inquiry fully exposes how flawed the decision making process has been,’’ she said.

Read the full article in the Newcastle Herald.