Cutting Newcastle rail line at Wickham would be a backward step: former resident

The Maitland Mercury continues its coverage of the Newcastle Rail truncation: 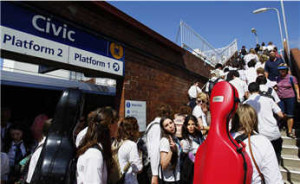 CIVIC STATION: Former Hunter resident Paul Newman says other countries are looking to expand their heavy rail services while the NSW government wants to get rid of it.

The Hunter should take a leaf out of London’s book when it comes to public transport.

That’s what a former Hunter resident living in the United Kingdom thinks.

Paul Newman has been following the public debate on the plan to remove Newcastle rail line.

He wrote to the Mercury this week to put the debate into an international context.

“As a London resident now, I am ­witnessing great strides in creating new heavy rail infrastructure – Crossrail, Thameslink, etc – taking rail right through the heart of the city, deemed by our government to be absolutely essential to provide the transport needs for a modern 21st century city,” Mr Newman said.

“The government considers the multi-billion pound price tag well worth the investment in the city’s future.”

Mr Newman said it was depressing that the NSW government planned to take the heavy rail from the heart of Newcastle.

“It’s not just the act of doing it, but how it is being done – rip the line out then we’ll think about the alternatives,” he said.

Read the full article at the Maitland Mercury.