IMPORTANT: HDC’s own figures show that keeping the rail is the economically superior option

Hunter Development Corporation’s 2009 Cost Benefit Analysis was flawed and misleading, as demonstrated in SOR’s response to HDC report (pages 19-21), as copied below.

[SOR update 24/11/2014: The Newcastle Herald reported that University of Newcastle representatives Nat McGregor (chief operating officer) told the Parliamentary Inqury that the rail line “never came into the business case” and was unable to explain how a Hunter Development Corporation cost-benefit analysis prepared by consultants said the move was predicated on the rail’s removal.]

An interest and intention by Newcastle University to extend its campus provision within the city is being used in the report as an inference that the University is supportive of the closure of the rail line. The Vice Chancellor has since publicly stated that the University has not taken a position on this issue, nor will it. [1], [2]

The relocation of University facilities can be achieved without cutting the line to Wickham. There is nothing in the HDC report that provides any support for the suggestion that development of the CBD campus is contingent upon the termination of the rail at Wickham. In fact the rail will be more crucial for the effective movement of such a large number of students between the two campus areas.

Under the heading “Catalyst Projects that are Contingent on the Removal of the Rail Line”, the Urbis report states: [3]

“The University of Newcastle perceives the removal of the rail line to be a key success factor for development of a CBD campus. To this end, if the rail is not removed this may jeopardise the development of the CBD campus going ahead.”

This is false information as the Vice Chancellor has indicated.

“Thus, the economic benefits associated with the CBD campus development are also only considered realisable if the rail is removed. These benefits are therefore incorporated into the CBA analysis of the preferred rail option [Wickham terminus west of Stewart Avenue].”

A fair assessment would involve combining the University expansion with retention of the rail. There is no demonstrable reason for believing this development would not be equally successful whilst retaining the rail. This combination was not considered by HDC.

Once the benefits of the new CBD campus are factored into rail retention options, keeping the rail has a superior benefit-cost ratio (BCR) of 2.24. Reducing the cost by not creating a rail overpass at Stewart Avenue increases the BCR to 2.73. Note that the best Wickham termination option scores only 1.25 (see graph below). 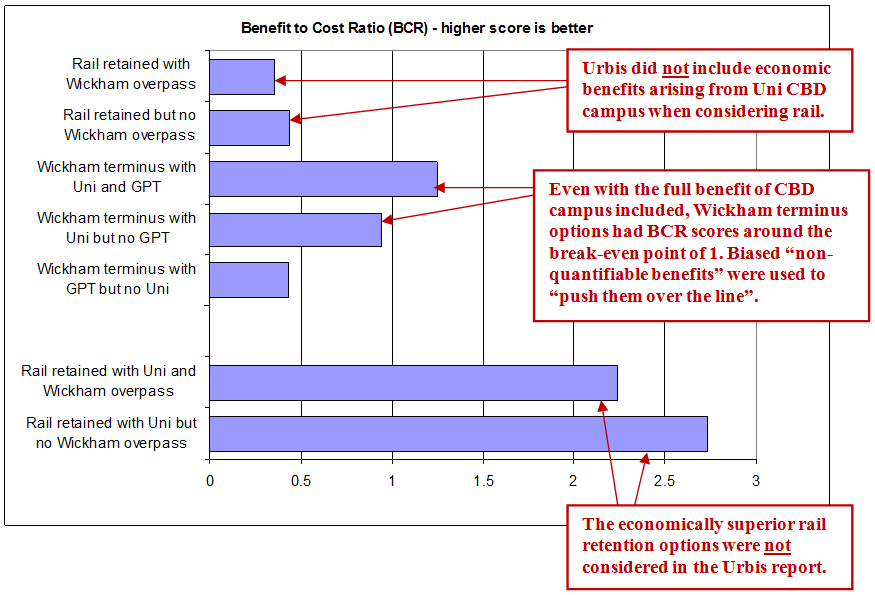 The economically superior rail retention options were not considered in the Urbis report.

The Urbis economic report goes on to explain:

“Basically when choosing between different options the option with the higher BCR is superior to ones with lower values.”

If the university CBD campus is included on the benefit side of both options (cut the rail and keep the rail) then retaining the rail emerges as the far superior option in cost benefit terms (by almost $200 million more on Net Present Value). Keeping the rail is the economically superior choice.

The calculations below show how the BCR scores were calculated. All were figures obtained or derived from Urbis cost-benefit analysis using the medium discount rate of 7%. The net present value (NPV) benefit of the University CBD campus is $537 million.

[2] Email from Vice Chancellor Nicholas Saunders to NU Student Union Representative, 02/06/2009; Prof Saunders wrote “the University has not taken a position on the fate of the heavy rail line in Newcastle nor will it.”